Since our move last summer from Texas to Missouri, I've been mostly throwing stuff away, it seems, though we have plenty of things left. The sewing room was left as the last challenge. I'd promised my husband I was going to put all my crafts into one room, and this job was much more difficult than I'd ever imagined. In my case "Artist" is defined as a person who buys more supplies than she uses.

As I'm writing this, the task is almost done. But here we were at the start of the project: 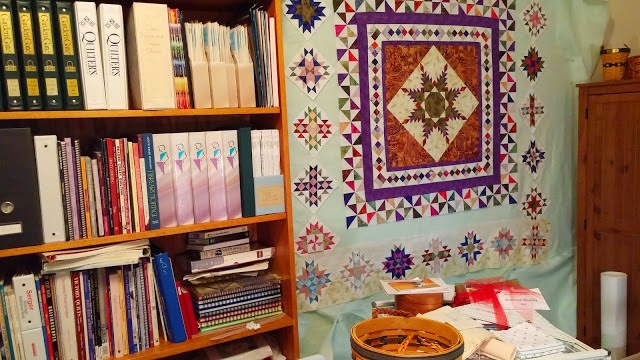 I took the above picture first, and was surprised to see how orderly it looked, mainly because I'd already organized the bookshelves. But I just turned around and took a photo of the rest of the room, and the true story emerges. 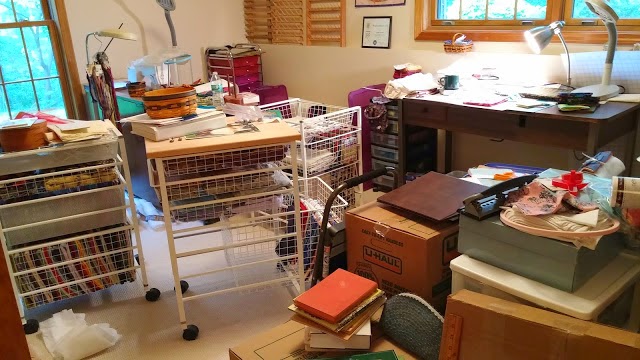 The pile of things in the bottom right of the picture are numerous boxes and plastic bins  not yet opened or sorted. Hours and hours tolled on before I had a handhold on this mess. The brown desk under the windows eventually left the room, but it was used for a myriad of things while I was working here. The three wire basket units were to be my fabric stash, but fabric proved to be too heavy for them. You'll see my solution in the next blog.

Loosening up from perfectionism 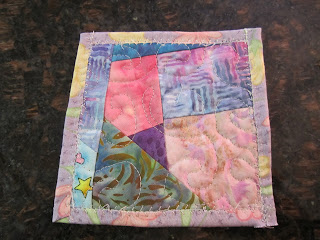 This little coffee coaster is for my sewing room, using just scraps of fabric. I'd just read "15 Minutes of Play" by Victoria Findlay Wolfe, and since I had a little basket of small scraps nearby, did just as she advised. Her method uses crazy-quilted scraps like the above that are then cut into traditional shapes and pieced together with solid or coordinated fabric, for a very attractive combination. For me it's an appropriate blend of sane methods and crazy quilting. I really like it.

On this sample, I pulled up the backing fabric to make the edge, then sewed a decorative stitch down the raw edge. The first time I tried it, I used some left over binding that turned out not wide enough (now in the trash). The next ones I make I'll use some of my other left over binding. I like the more finished look. These might even make a last minute Christmas gift from me to someone. They're a ball to make! 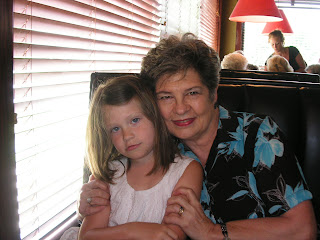 This is when Ryan and Sue were engaged, and I stayed with Ryan and Lily while she visited her Dad. We saw Ruby Falls and the caves there and had a great time.

Posted by Yvonne at 7:13 AM No comments:

The next two borders: STARS 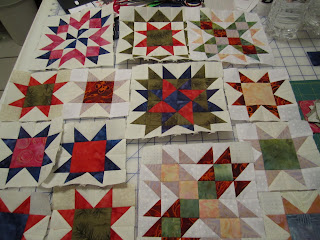 For each color combination, four 6-inch blocks and eight 4-inch ones are made. The half square triangles are created by using paper patterns, then cut apart and put together into a variety of star designs. These stars will be laid out on point, then, to make the next two borders. It's fascinating to me to see the effects of combining the colors in different combinations.

There are 17 colors altogether in this quilt, and they are ones I chose to replace the colors designated by the quilt designer. This means my teeth chattered when I chose them, from fear that the colors are not going to  work in the whole design. I'm a real beginner here, but I tend to jump into complex things early in learning a craft, just because it's more interesting. I'm too impatient.

One of the challenges is that the printed out half square sewing paper patterns are just about 1/32 off on one direction, so every six inch block had to be sewn with that in mind. Next time watch me use the professionally printed grid sheets instead of my own printed out ones.
Posted by Yvonne at 12:05 PM No comments: 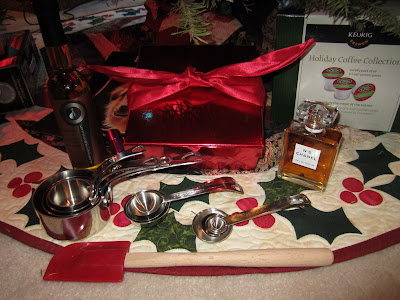 In the foreground are the three sets of measuring cups and spoons from Williams Sonoma. This was a gift I'd asked for, and our son Sean bought these for me. I just needed a new set; Sean picked them out. They're substantial, beautiful, and (I'm sure) accurate. My husband gave me my favorite Chanel No. 5 perfume, packaged in that gorgeous red box. To the left is a bottle of olive oil with garlic. The spatula in front of everything is heat resistant, great for making and turning out omelets. Hmmmm! There seems to be a food theme this year, do you think?To the right is a 48-count box of holiday-flavored Keurig cups from Jay, who knows I love specialty coffees.

Our Christmas was relatively quiet, with just three people, but the gifts were just right--not too many but appropriate and appreciated.
Posted by Yvonne at 7:06 AM 1 comment:

Getting Ready for Christmas 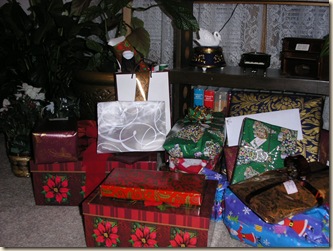 I get lazier each year, it seems. This is the 13th of December, and I’ve accomplished almost nothing: a few presents purchased for parties (thus “required”), a few decorations placed, but no serious work done yet. There seems to be an internal shift to doing just what makes me feel good, and less of doing what other people might think I need to do; that’s not my family expectations – we all enjoy the very simplest things. It’s more the perceived expectations of those “out there.” I suppose I’m thinking of the magazine articles and all the beautiful decorations everywhere that made me feel  in the past that I should be doing MORE!!!! Maybe I’m finally learning some balance between what I think I should be doing and those things we deeply enjoy.
Posted by Yvonne at 7:42 AM No comments:

Just who am I, anyway?

Today it's literally been an entire year since I've posted here. As I've just joined Sharon Boggin's TAST for 2012 (that's "Take a Stitch Tuesday), I've renewed interest in this Blog. I first "met" Sharon when I received squishies from her in the USA/Australian squishie exchange conducted by her and Willa. One year, many of the Australian squishies were lost in transit, and Sharon heroically filled in for the missing pieces. I think I got three from her that year, all of them lovely. I subsequently took an online class from her on crazy quilting. I seem to be a perpetual student in that area.

Here's what I've been working most on lately: my daughter's quilt. I see from a previous post that I started this quilt in 2009 (February ), so I'm not what you'd call a speedy quilter. In my defense, this quilt is by far the most intricate I've ever tackled. Here's a picture of its progress: 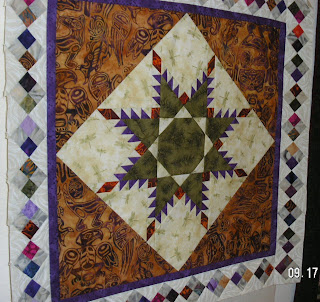 It's actually gone far beyond that, but the next "layer" is a bunch of 6" star blocks (32 of them), pieced out of 1" pieces, to be laid out on point for the next border. I'm having a lot of fun with it, but am struggling with giving myself permission to work on it. Even though it's now a "have-to" project, it's so much fun that I tend to try to have my day's work done before I allow myself to work on it.

And.... I also struggle with whether I'm a sane quilter, a crazy one, or a knitter. I love all three crafts. One of the reason I joined TAST is to be forced to work more on crazy quilting.
Posted by Yvonne at 4:33 AM No comments:

Yvonne
Happily married grandmother of seven, love to sing, grow herbs and work with embellished fabric. Turning myself over to God more and more. We travel a lot and have lived in all parts of the U.S.